An old aphorism claims beer is proof that God loves us and wants us to be happy. And when one adds to Montana’s world-class beer offerings the breathtaking diversity of our landscape, from the eastern prairies to the western mountains, one could be forgiven for believing that Providence has especially favored our state.

If the state legislature maintains its sometimes wavering support of our homegrown microbreweries, Montana will be well on its way to establishing itself as the Napa Valley of beer within a few short years. Boasting the second most breweries per capita in the nation, we already have 38 breweries — with nearly 10 more in the works — that are adding value to the agricultural products that comprise the backbone of the state’s industry. END_OF_DOCUMENT_TOKEN_TO_BE_REPLACED

By Brent Zundel
For the MSU Exponent
April 4, 2013

This week, leave your beer mug on the shelf and dust off your long-stemmed glasses for a toast to Dionysus. We’re talking wine.

Wine production, or vinification, dates back to at least 6,000 BC, although different regions developed it at different times. While Montanans are becoming more and more familiar with craft beer, any wine fancier than Franzia still intimidates many college students. END_OF_DOCUMENT_TOKEN_TO_BE_REPLACED

By Brent Zundel and Matt Kennedy
For the MSU Exponent
March 28, 2013

Turns out, coffee is way better than beer. I was trying to tell Brent this last week, but he was being a complete ass clown and wouldn’t hear me out. I was being super nice, really, and then he started shouting and threw beer in my face. So much for friends. Anyway, I’m sure the readers will see it my way, so I’m going to shell out the facts.

Unlike beer, coffee has rich cultural value. From the proud farmer to the discerning roaster, there is an inexorable love of the drink that runs through every moment of each bean’s existence. Beer’s only culture is moldy yeast. Brent tried to feed me this crap-beer he brewed in his closet — this was before he threw it all over my nicest shirt — which was probably brewed with his toenail clippings and spit. I’m surprised a hillbilly who drinks that swill can even write. END_OF_DOCUMENT_TOKEN_TO_BE_REPLACED

If one special interest group has its way, Montana taps might soon run dry from Wibaux to Whitefish. The Montana Tavern Association (MTA) has spent the current legislative session sponsoring bills that would devastate the state’s burgeoning microbrewery scene. 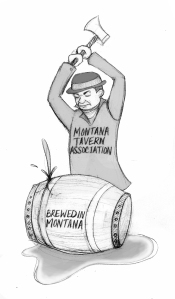 With our state ranking second in the nation for microbreweries per capita, Montanans love our beer. An October 2012 study showed that craft breweries contribute $50 million to the economy, $1.5 million to the state’s coffers and about 500 jobs to the state.

Despite this, at the start of the 2013 legislative session, Rep. Jeff Welborn, R-Dillon, introduced a bill that would have restricted microbreweries to selling only 10 percent of their beer on site. The rest would have to be sold at bars or retail outlets, a requirement that could have shuttered 31 of Montana’s 38 microbreweries. Vigorous and immediate uproar killed the bill.

The text of another MTA-backed bill, sponsored by Rep. Roger Hagan, R-Great Falls, was just released Tuesday, March 19. This bill is no better: It would allow breweries to sell only 40 percent of their beer in sample rooms. END_OF_DOCUMENT_TOKEN_TO_BE_REPLACED

By Brent Zundel
For the MSU Exponent
March 3, 2013

Bridger Brewing became the newest addition to Bozeman’s collection of microbreweries this Saturday, March 2. Located in the Town & Country complex just a block away from the MSU campus, the brewery is serving up “craft beer with craft pizza,” according to General Manager and Owner David Breck. 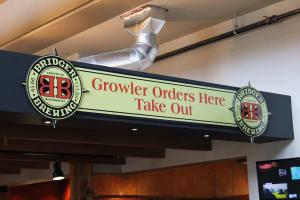 The sign above Bridger Brewing’s bar. Photo by Brent Zundel

Last night, Bridger Brewing held a family and friends night as a trial run, but today is their first day open to the public. Business was brisk, but not crowded as a group of friends and I were seated in a cozy corner table right away.

The brewpub’s ambiance is a significant shift away from any of the others in town. Large floor-to-ceiling windows shower the entrance in light, but the back of the building opens up into a cavernous seating area with low mood lighting and sleek black tables. END_OF_DOCUMENT_TOKEN_TO_BE_REPLACED

By Brent Zundel
For the MSU Exponent
February 28, 2013

Good drinks abound in Bozeman, but what if you had to choose just one drink from each watering hole? No lingering over endless pitchers at the Hauf or lighting your pocketbook on fire for round after round at the Bacchus.

Instead of wearing ruts into a few blocks of sidewalk downtown, branch out and try somewhere other than the main slog of college bars. What follows is a non-scientific exploration of some of Bozeman’s most interesting places to knock one back, none of which you’ll find downtown. END_OF_DOCUMENT_TOKEN_TO_BE_REPLACED

By Brent Zundel
For the MSU Exponent
February 14, 2013

Even if you don’t wake up with a tiger in your bathroom, a missing tooth or someone else’s baby in your closet, almost every college student will deal with a hangover sooner or later. END_OF_DOCUMENT_TOKEN_TO_BE_REPLACED

How would you react if, instead of adding carefully cultivated yeast strains (or formaldehyde in the case of PBR), your favorite brewery let wild yeast and bacteria spontaneously ferment your beer? Could you stomach the distinctively sour taste?

A row of lambics for sale at Joe’s Parkway.

If you could — or if you just want a beery, new adventure — pick up a lambic beer at a local grocery store. Unlike the traditional ales and lagers that get us through the week, lambics rely on spontaneous fermentation from wild yeast and bacteria. Typically, the beer is brewed with a 70:30 percent ratio of barley to wheat. END_OF_DOCUMENT_TOKEN_TO_BE_REPLACED

By Brent Zundel and Matt Kennedy
For the MSU Exponent
January 24, 2013

When Brewponent writers Brent and Matt arrived unannounced at the Bozeman Brewing Company at the crack of noon one day over Christmas break, we found the building, as near as we could tell, completely deserted, even after dutifully pounding on the front and back doors.

Business Manager Tucker Kalberg had previously invited us to stop by sometime after 9 a.m. — there should be someone there to show us around, he said.

When we showed up at 2, their official opening time, the tap room was occupied by just a few early-birds, a bartender, the owner Todd Scott, and Kalberg, walking around with a smile and still-damp ski gear draped over his frame. “We enjoy working as much as we enjoy playing,” he explained.

The reason for the Brewponent’s visit to the Bozone this break was one of their most popular seasonal beers: the Buzz Kill Java Stout. Coffee beer with a dash of local flare is a serendipitous combination of the alternating bartender and barista content of this column. END_OF_DOCUMENT_TOKEN_TO_BE_REPLACED

Montucky Cold Snacks: Drinking with a Cause

By Brent Zundel
For the MSU Exponent
November 29, 2012

Do you enjoy the low malt profile and slight hop bitterness of cheap, corporate brews like PBR, Rainier, Coors or Bud, but still care about giving back to your community? Do you enjoy drinking light beer, going to rodeos and howling at the moon, but want your choice of beer to reflect your undying love for Montana? END_OF_DOCUMENT_TOKEN_TO_BE_REPLACED