Montucky Cold Snacks: Drinking with a Cause

By Brent Zundel
For the MSU Exponent
November 29, 2012

Do you enjoy the low malt profile and slight hop bitterness of cheap, corporate brews like PBR, Rainier, Coors or Bud, but still care about giving back to your community? Do you enjoy drinking light beer, going to rodeos and howling at the moon, but want your choice of beer to reflect your undying love for Montana?

Then crack open a Montucky Cold Snack in the coming months. This new beer, the brainchild of Montana natives Chad Zeitner and Jeremy Gregory, is a bit tough to conceptualize. The duo wanted a beer that reflected Montana’s unique culture, but also one that was cheap enough for the average Montanan to enjoy.

Zeitner and Gregory met through a mutual friend about two years ago. They were both looking into starting a brewery, so they “went down to the Bacchus one night and drank on it.” Gregory was a fan of craft beer, but light lagers always held a special sway over his Eastern Montana roots.

Gregory was also worried about a possible saturation of Montana’s microbrewery market, so he proposed a light lager with regional appeal. The upfront cost of a brewery, however, was prohibitively expensive, so they iterated on different business models that would salute the “beauty and fragility” of Montana and give something back to the state they loved. Thus Montucky Cold Snacks was born.

In an interview with the Exponent, Zeitner described how through a long, trial-and-error process, the two arrived at a niche in Montana’s beer scene: Brew an inexpensive, regional light beer that celebrates Montana. They’re not competing with Bozeman or Big Sky Brewing; rather, they’re going toe-to-toe with PBR, Coors and other light lagers.

This decision led to one of the stickier explanations for a beer that purports to celebrate the culture of a state that’s notoriously wary of outside influence and out-of-staters themselves: Cold Snacks are actually brewed in Wisconsin.

Zeitner was quick to acknowledge this fact — as is the company’s website — and it’s that transparency that many Montanans should value. He explained that, in order to offer the beer at a price low enough to compete with the big-name breweries, they had no choice but to contract a large out-of-state brewer because all of Montana’s microbreweries have capacity for only their own small batches.

Eventually, they hope to move the brewing process to Montana, but Zeitner isn’t sure when they’ll be able to afford that decision. Until then, he’s confident that their beer can still be “regionally relevant,” and the duo has devised an innovative way to manage that. The business plans to give 8 percent of their profits to Montana charities, nonprofits and other organizations that support “the lands, people, wildlife and arts” that Montanans love.

They call it “drinking with a cause” and are currently accepting nominations for organizations worth supporting.

This venture represents a new concept in Montana — a hybrid of sorts, combining aspects of a big domestic brewer and a local microbrewery. Zeitner and Gregory are betting that the light lager-drinking folks who still care about their communities will opt for a Cold Snack over something brewed by a large out-of-state brewery that gives almost nothing back to our state.

When not moonlighting as small businessmen, Zeitner and Gregory do have day jobs. Zeitner is an electrical engineer by training, and Gregory works for the Forest Service during the summer and at Bozeman ski hills in the winter.

Of course, regular readers of this column will expect some tasting notes, and I try not to disappoint them (all 11 of them). I’m a bit of a beer snob, but I recognize that a great many people prefer light lagers to refined microbrews.

All light beers taste similar, and this one’s no different: low malt profile, low hop bitterness. That said, I actually did enjoy this beer (although my affinity for Montana combined with their top-notch branding may have biased my assessment). It’s smooth and refreshing. And as my roommate Chris Zimny, of Billings, said, “Cold Snacks remind me of Eastern Montana: a bit plain, but with flavor in all the right places.”

As for the beer’s name, Gregory did a lot of the work to arrive at their final decision. It’s designed to appeal to a younger generation and to give “props to the hick side of Montana,” Zeitner explained. 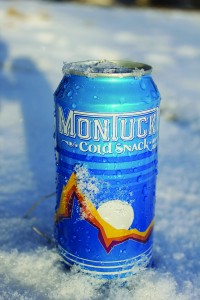 By Friday, Nov. 30, Cold Snacks will be available at many local grocery stores, including Town & Country, Joe’s Parkway, Heeb’s and a couple gas stations near campus. Crack a cold one at the Haufbrau, the Molly Brown, the Filling Station or Plonk when you’re out for a drink with friends. The duo hopes to have their beer available in Billings by the first of the year and in Missoula and Kalispell later on.

There will also be a release party Saturday, Dec. 8 in the Eagle’s ballroom. Doors open at 7 p.m., and music starts at 8. Cure for the Common, Bad Neighbor and Dave Walther will all be playing. Admission is free and tall-boy Cold Snacks will set you back only a buck-fifty.

Montucky Cold Snacks, Zeitner concluded, “are something we hope everyone can have a little fun with.” Find them online at montuckycoldsnacks.com.