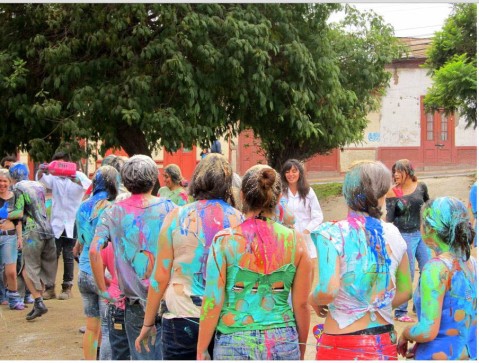 My first day at the university, I saw young students walking around half-dressed, without shoes, and covered in various colors of paint, flour, and other interesting-smelling liquids, so I asked the Chileans in my lab what was going on.

“El mechoneo,” they replied. I didn’t know the word in Spanish, so they explained it to me. Hazing! (It turns out that, as in so many other instances, Chile has its own unique word here.)

They explained that this tradition lasts for the first two weeks of classes, with each degree program typically choosing one day to initiate first-years. Students are stripped of some of their clothing and belongings, then covered in paint and other substances, like flour, mustard, eggs, vinegar, fish, etc. They are then made to perform any number of unpleasant tasks. Sometimes, a couple students are selected to perform embarrassing or degrading acts in the middle of a circle of students (kissing the head of a dead hog, running a gauntlet-style obstacle course, etc.), and they are then sent out into the streets to beg for money. 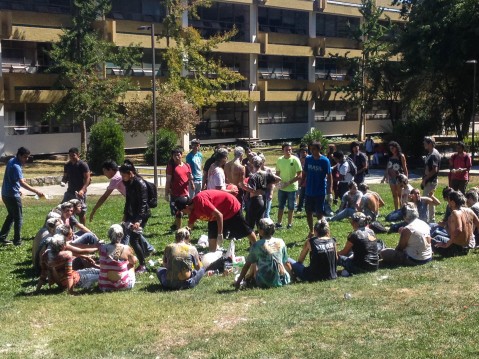 As the other students in my lab explained it, they have some of their belongings taken away and have to beg for money on the street in order to get them back (from what I understand, they are tasked with bring back a certain amount – sometimes up to $20 – 30 USD, which is a lot when you consider most people will just give you a few coins). A sort of committee is set up to decide which program throws the best mechoneo, and the winners gets a pot of cash for their party. A couple students approached us one day as we were walking to lunch, but the Chileans told them to go out into the city and not stay on campus.

Begging for money to buy their clothes back (and throw a raging carrete). Photo courtesy luisgaston.blogspot.com

This group of mechones just asked us for money.

One morning, I watched as what must have been a couple hundred students marched past me in various states of disarray while older students marched like guards on either side of them while they chanted various phrases.

They older students had white aprons on and looked like nurses, so I asked if this was the nursing faculty. Maybe, my Chilean friends said, but maybe they just want to keep themselves clean. 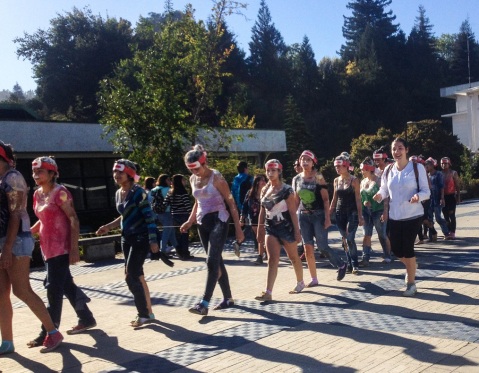 Later, I looked up mechoneo online and read that it originated in the 1960s and comes from the word mechón, or lock (as in “lock of hair”).The tradition started out by snipping off a lock of hair from freshmen and then transformed into cutting off all their hair. I didn’t see any involuntary haircuts in Concepción – only lots of freshmen covered in paint, missing half their clothes, and walking through campus begging for money.

Along one of the main boulevards on campus, the university hung signs imploring students to keep this week fun, to make sure that the freshmen are treated respectfully, and to avoid violence (the last request seems a little intense).

Apparently, this is a sign that needed to be put up? “During the receptions for your new classmates, help us to avoid a violent hazing.”

There is even a guide (in Spanish) on how to survive la semana mechona. Some of my favorite pieces of advice:

I’ve heard stories about hazing like this in the U.S., but never something this open and accepted. There has been significant pushback against it in Chile – in fact, there has been quite a bit of controversy about the objectification of women at the University of Concepción after images of a female nursing student who had to simulate sex acts surfaced Thursday, March 12 (mildly NSFW article in Spanish).

Here is a well-done video from a girl who was brave enough to strap a Go Pro to her head while she went through mechoneo:

A North American expat who lives and blogs in Chile offered a decent explanation in favor of mechoneo:

“I generally see this behavior as harmless bonding behavior – as long as it stays within the boundaries of face painting and flour throwing, without getting into the category of nasty, denigrating, or dangerous. Chilean culture is very much group oriented and sharing initiation experiences provides opportunities for bonding. These students will sit in the same classrooms and share the same curriculum for the next 4 years and struggle through a group thesis for at least another year. They are entering into a social networking system that began long before Facebook and will be a vital part of their careers for the rest of their lives. In a culture that places such great importance on contacts, being part of the group is essential. And that requires a rite of passage: mechoneo.”

Still, my roommates did not seem particularly fond of the tradition. One skipped the entire first week of classes to avoid mechoneo, but the other one had to go through it twice because he switched schools – once in Santiago and again in Conce. When I was in Valdivia in 2010, I completely missed this tradition because I was there for only the second semester.

Thank goodness I already did one semester of studies in Chile, though.

Apparently, I am far too young to be passing judgment on hazing in the U.S. A friend pointed me toward this clip from “Dazed and Confused,” the 1993 high school coming-of-age high movie of which I have only ever seen bits and pieces. This is strikingly similar, but obviously fictional.

One response to “El Mechoneo – Hazing”