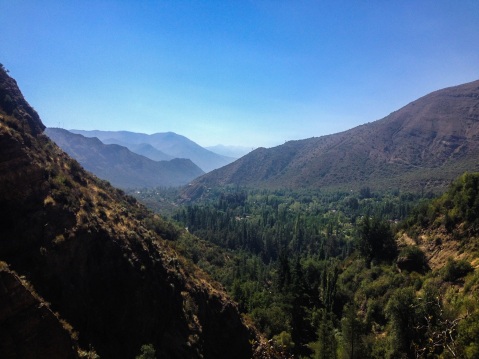 A post titled “Patience and Luck” seems to accurately sum up my Fulbright experience so far. Almost two weeks into my stay, I finally have a bit more time to think and reflect, rather than worrying about making my next flight or trying to figure out the best store to buy bed sheets.

I had planned to arrive in Santiago at 10 a.m. Wednesday in time for our 2 p.m. Fulbright orientation, but, thanks to some mechanical delays on my United flight, I spent a very short night in Houston and arrived just before midnight, after rescheduled flights and a layover in Panama City. Paciencia.

Once I actually made it to Santiago, everything went smoothly – I took a shared taxi service to my hotel and crashed for five hours before waking up for day two of orientation. Most of the administrative presentations happened on day one, so I got to listen to a motivated, cosmopolitan group of young people talk about their research projects. Suerte. 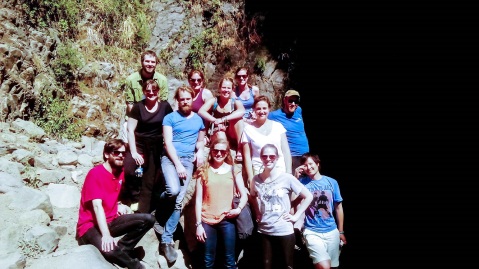 On Friday, our last day of orientation, we had lunch together and took a short hike to a waterfall in the Cajón del Maipo, a canyon at the base of the Andes about an hour outside of Santiago.

The Maipo River in the canyon.

That night, a group of us headed to Barrio Bellavista, a hip, bohemian neighborhood for a few drinks.

As is typical in a city where over a third of the population lives in the capital, most of the Fulbrighters are also based there – I am the only Fulbrighter based full-time in Concepción.

As I boarded my bus to “Conce” (cone-say) Saturday morning, I was a little bummed to be leaving a great group of people I’d just barely met for the unknown, but also excited to really start on my research and finally settle in somewhere.

I arrived at the bus station in Conce without incident, texted my roommate a quick “I’m here,” and grabbed a $5 cab to my new apartment.

When I was preparing for this adventure back in Bozeman, finding a place to live served as a significant source of stress for me, but I found someone on a housing website, sent him a message, got a response the next morning, chatted over WhatsApp, then committed that afternoon. It was a little unbelievable to me that finding a roommate a continent away had been so easy, but everything fell into place. Suerte.

When the cab dropped me off, my new roommate Cristóbal waved from the window, then came down to help me with my suitcase. Our apartment is on the second floor, just four blocks from the university and equally close to the centro.

I met Cristóbal, who is studying metallurgical engineering, and our second roommate, Jorge, who is Cristóbal’s cousin and is studying law. Cristóbal had told me they were doing some repairs to my room, but I was a little surprised to walk in and find it bare, without even a floor. I chatted over coffee with Jorge and another friend, Carola, while Cristóbal installed my floor. Jorge is focusing on water rights, so my first afternoon, he handed me a 500-page book on the Chilean water code. Paciencia y suerte. 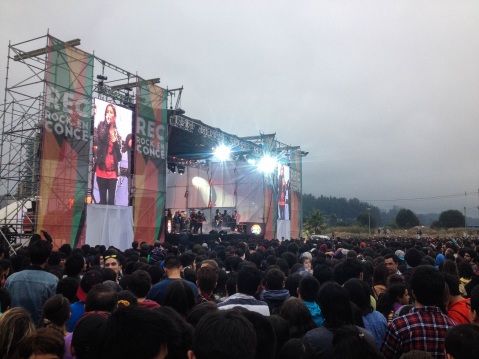 After accomplishing that, Cristóbal and Carola took me out for a tour of the city and to a rock concert near the river. The Chileans I’ve met describe Concepción to me as an “alternative” city – there are lots of universities and students; lots of beards, dreads, and different fashion styles; and lots of great local bands.

Cristóbal and Jorge have been super friendly, introducing me to their friends and inviting me out with them. I’ve had three of their friends independently tell me that I got lucky to find them. (One friend told me, “Mira, weon, este weon no te va a webiar po,” which is a comically Chilean way to tell me that he won’t screw around with me.) Suerte. 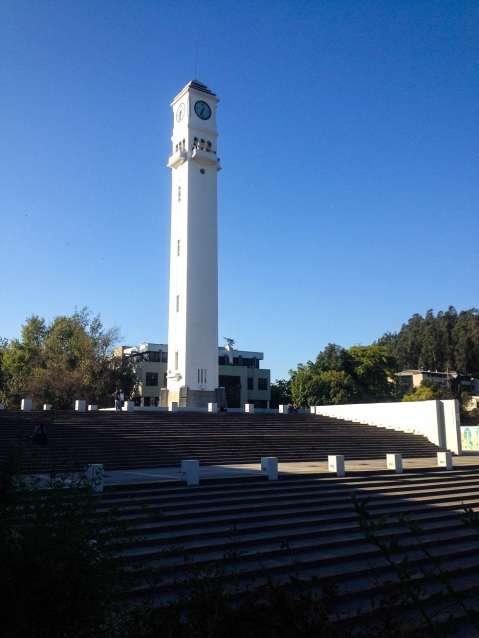 The campanile at the University of Concepción.

On Monday, I met everyone in my lab. There are a couple Chilean master’s students and a couple German exchange students – my professor speaks Spanish, English, and German. The Chileans in my lab have been very friendly, making sure my housing is OK and helping me figure out where to buy some furnishings for my room, even offering to drive me there.

Another Fulbrighter met an engineering student while traveling, and it turns out this student is from Conce and works in the same building as I do, so we are planning to meet up. Yet another Fulbright contact put me in touch with her friends in Conce and a trekking club here.

Chileans have a well-deserved reputation for being welcoming and helpful, especially toward foreigners. I know people in Valdivia from my study abroad in 2010, but since I am brand new in Conce, everyone has gone out of their way to welcome and help me because family and friends are such an important part of Chilean life. I hope Americans are this welcoming to international students. 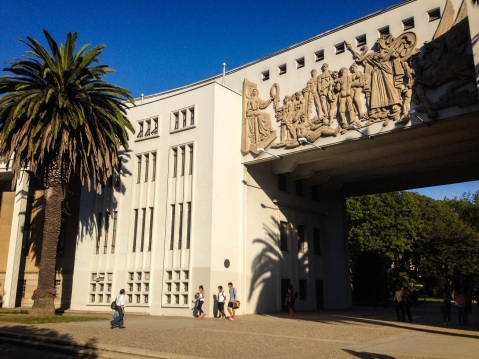 The entrance to the University of Concepción.

In short, my inner American wants to arrive and integrate into a lab team seamlessly, to know where to buy room furnishings, and to immediately recall every Spanish word I know, but life doesn’t work that way. Moving to another country is about celebrating the small victories: figuring out where to buy bed sheets, lucking out by finding two great roommates, remembering an obscure piece of Chilean slang to whip out with your new friends, and realizing that you can buy a great bottle of wine for $8 or a large box of raspberries for $2.

It’s a little scary not to have any American friends here (sometimes you just need someone who can understand your need for peanut butter or someone who can sing the theme song to “The Fresh Prince of Bel-Air” with you), but I think it will be a great experience, both in terms of broadening my understanding of Chile and in cementing my Spanish.

Every experience abroad seems to go through distinct phases, and I’m certainly still in the honeymoon phase where I see everything through rose-colored glasses (So many new friends! Chile has banned smoking in bars since I was last here! Even the stray dogs look friendlier!). But I feel a lot happier than when I moved to Valdivia in 2010. Maybe it’s the extra sun or the fact that, instead of living in a boarding house, I think I will get to know people well this time around, but a lot of it is also probably that I’m older and more mature. I’ve traveled a lot more and lived abroad in Chile and England. I feel more excited about integrating myself into a new culture and trying to learn as many goofy chilenismos as I can, whereas I think, in hindsight, I was a little more resistant in 2010. Instead of leaving the U.S. for the first extended period, Chile feels familiar in some ways and new and exciting in others. 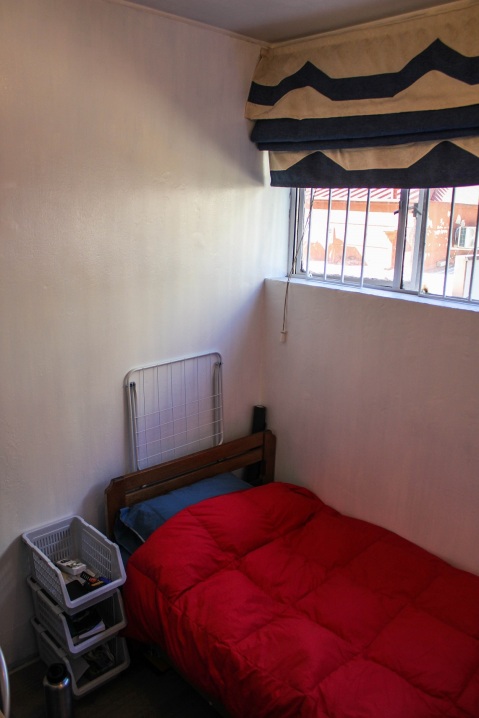 I know what you’re thinking: He nailed it with those bed sheets. Yes, yes, I did. My Chilean roommates joked that I would be too tall to fit in the bed (I’m not, but just barely). 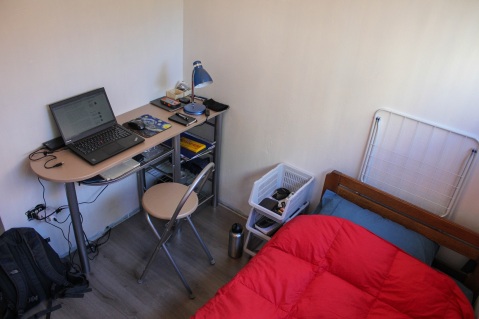 I bought a desk too.