By Brent Zundel and Matt Kennedy
For the MSU Exponent
January 24, 2013

When Brewponent writers Brent and Matt arrived unannounced at the Bozeman Brewing Company at the crack of noon one day over Christmas break, we found the building, as near as we could tell, completely deserted, even after dutifully pounding on the front and back doors.

Business Manager Tucker Kalberg had previously invited us to stop by sometime after 9 a.m. — there should be someone there to show us around, he said.

When we showed up at 2, their official opening time, the tap room was occupied by just a few early-birds, a bartender, the owner Todd Scott, and Kalberg, walking around with a smile and still-damp ski gear draped over his frame. “We enjoy working as much as we enjoy playing,” he explained.

The reason for the Brewponent’s visit to the Bozone this break was one of their most popular seasonal beers: the Buzz Kill Java Stout. Coffee beer with a dash of local flare is a serendipitous combination of the alternating bartender and barista content of this column. 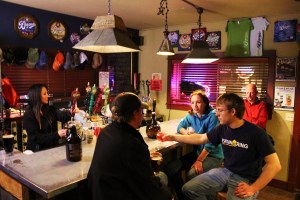 There’s little that Bozemanites enjoy more than refreshing beer and hot coffee (except, perhaps, skiing, Subarus and dogs). Buzz Kill doesn’t disappoint on either front. It’s a strong-bodied stout infused with coffee flavor and aroma that mixes the best of a solid stout and a sweet espresso.

Five years ago, the Bozone brewers decided to make a coffee beer. They bought coffee for their first batch of Buzz Kill at Costco, Kalberg admitted, saying they’ve always gone for a dark roast. But the brewers don’t skimp on malt, yeast or hops, so they reached out to local coffee roasters.

For the next two years, the brewery partnered with the Daily, but they’ve brewed with Rockford beans for the last three batches, including the current one. “They approached us, and it has been a great relationship ever since,” said Ryan Wilson, owner and head roaster at Rockford Coffee.

“The Dark House Blend is what they drink at the brewery so naturally they wanted that in the stout,” Wilson said. The blend is a “full city” roast, a roast temperature slightly lower than a dark roast, which mutes the brighter notes of the bean but gives a smoky finish. You can’t taste the coffee in the Buzz Kill like you would in a French press, but at least in principle the Dark House Blend is a great pairing for the Buzz Kill.

The beer itself is a stout with a strong malt backbone — it has to be able to withstand the flavor of the java. Stouts are a beer style whose history is intertwined with the related porter style. Stouts can vary significantly, but generally have a thick, sweet, dark malty body and a balanced hop bitterness.

Since this is a heavy, darker ale, it takes longer to ferment than most beers: about two weeks. Many beers take only five days or so for the actual fermentation process, plus additional time for bottle conditioning.

In order to infuse the coffee flavor into the beer, the coffee is cold-steeped with the beer for two weeks. The cold steep helps avoid imparting any bitterness from the coffee into the beer — it “doesn’t stress the bean nearly as much” as a hot brewing process would, Kalberg explained. This year a finer grind was used, which means the coffee chemicals leach faster and run the risk of overbrewing. However, the grind did the trick, as no over-brewed flavors, such as bitterness, were present.

The brewers focus on the aroma specifically. Buzz Kill definitely has a coffee flavor, but it still tastes like beer, and that’s important. Try serving this beer a little warmer than you would other beers — around a cool cellar temperature of 50° F. This will release some of the beer and coffee’s great aromatics, making for a more flavorful drinking experience. The warmer temperature also brings out the sweetness of the coffee.

Buzz Kill won’t disappoint either the dedicated beer or coffee drinker. It pours a dark brown with a creamy tan head. The solid stout body provides a good, sweet base for the coffee flavors. It’s quite low in bitterness — a byproduct of the cold-steeping process — which makes for an enjoyable drinking experience. The aroma is sweet and malty, with coffee overtones, hints of sweetness and a faint nuttiness.

At the end of the tour, Kalberg jokingly summed up the mindset at Bozeman Brewing: “We make pow turns by day and beer by night.”

Hurry over to the Bozeman Brewing Company, located at 504 N. Broadway Ave., for a pint or two (or three) before it’s gone. This seasonal beer is brewed in 20-barrel batches (one barrel is 31 gallons), and Kalberg predicts that Bozeman’s enthusiastic beer drinkers will finish that off within a few more weeks.

Make sure to take a growler to fill — you’ll want to take some of this beer home with you. Right now, a growler is the only way to take home any Bozone beer other than their amber ale, which is available in cans at most grocery stores and gas stations. Kalberg said they’re working on expanding their canning line to include their three other year-round selections: their porter, hefeweizen and IPA. At some point, they’d like to can their seasonals, but that’s down the road a ways, Kalberg said.

Buzz Kill Java Stout has been available on tap since December 23. Head over before it’s gone until next year.

Missoula’s Big Sky Brewing has their seasonal Cowboy Coffee Porter on tap now. Fill a growler if you’re passing through Missoula or grab it in one of their variety 12-packs. It’s also on tap at a few Bozeman bars, like 317.