Mount Vesuvius looming over the ruined city of Pompeii.

After Rome, we were off to Naples, a city immortalized in the Dean Martin song “That’s Amore,” birthplace of pizza, and a seedy locale stereotyped as a mafia hotspot. While the Lonely Planet guidebooks generally cast a positive light on destinations they cover, they don’t mince words introducing Naples, describing it as “a raucous hell-broth of a city.”

We took a dusty regional train south from Rome through the dry, Mediterranean hillsides of Southern Italy. As embarrassing as admitting this apparently should be — based on the expressions of the Europeans I later told this to — this was my first time on a train. Growing up in Montana simply doesn’t present many opportunities for train travel, and Chile, the only other country I’ve lived in for an extended period of time, runs on long-haul buses — not trains.

Amanda and my first impressions outside the train station tended to confirm Naple’s stereotypes: dirty, dusty, loud, anarchic. This is likely an incongruous comparison, but it reminded me a bit of Habana, Cuba, if Habana had more modern buildings that had suddenly decayed to their current level of disrepair and if the residents had the comparatively astronomical disposable income of Italians. Piazza Garibaldi, right in front of the station, undulated with a rolling mass of humans — vendors selling their wares, people waiting for buses or trams, and vehicles lurching past it all.

We stayed at Hostel of the Sun, which was honestly one of the best hostels I’ve ever been to. The staff were incredibly helpful and fun, and the guests seemed to walk the narrow line between being fun and people worth meeting at a hostel and being so much “fun” that they keep you up with thumping bass at 3 a.m. At a restaurant in the historic center of Naples, we ate some of the best pizza I’ve ever had, and then we met very interesting travelers from France and Germany at the hostel, with whom we shared some wine later that night. 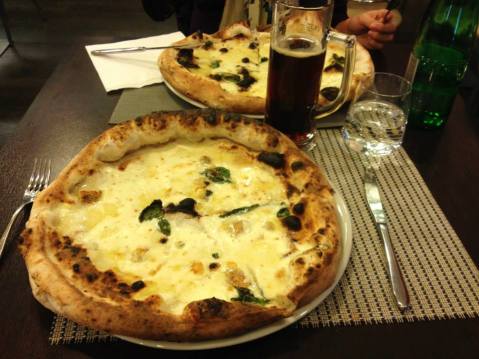 Pizza from the birthplace of pizza.

The next morning, a driver came to collect us for a horseback ride up Mount Vesuvius. My father found a cosmic sense of justice in this because Vesuvius had long been one of my favorite mountains. Somewhere in the family archives lies a wonderful home video of me at three years old in our old backyard in Salt Lake hiding in the crater of a chest-high snow volcano, waiting for my mom to get home from work, so that I could jump out of the crater and surprise her. My dad had even helped me splash water dyed red and yellow with food coloring onto the snowy slopes.

Getting ready to ride up Mount Vesuvius.

This time, two Dutchmen, Amanda, and I mounted our horses and followed cautiously after our guide, an Italian man in a puffy coat who spoke not a word of English. Following his gestures and short commands — “Ojo!” and “Hallo!” and “Keeeck!” (“Kick,” I think) — we clopped up the cobbled streets toward the looming green shoulders of Mount Vesuvius, as our guide waved and greeted neighbors lavishly. Soon, we were riding through gullies and ravines layered with sharp volcanic rock, while lush green foliage projected out along our path just barely above head-height.

We didn’t ride all the way to the summit, due to time constraints, but we stopped at a beautiful overlook, with stunning views of fall-colored foothills, the Bay of Naples, and the twisted and tangled mess that is Naples itself.

Above the Bay of Naples. 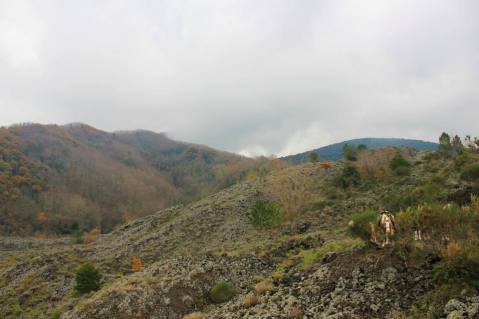 Looking up at the summit.

On the ride down, Amanda’s horse decided he’d had enough and stopped mid-trail to eat. In no mood to listen to her protestations, he munched away while our guide lobbed profanities and unintelligible instructions back across the trail. Tiring of waiting, he demonstrated (again) how to use the reigns as a whip on his own horse, before riding back himself and whacking Amanda’s horse across the backside. Amidst all of this tension, a brief moment flared where I was afraid someone’s horse would buck, but the moment passed almost as quickly. Soon, we were galloping — really galloping — through a flat, grassy stretch of the foothills. It’s hard not to smile a little bit and envision yourself a cowboy or a gaucho.

Astride my mount on the lookout. 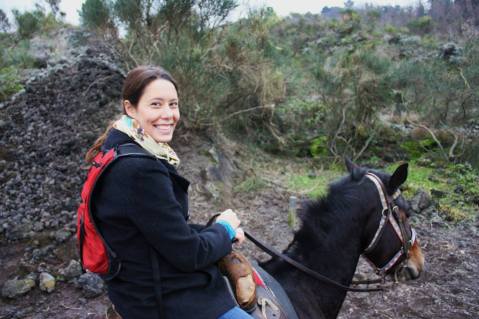 Shortly before her horse went AWOL.

As soon as we made it back to the stables, Amanda’s horse — with her still saddled on top of him — headed straight for the grain bin, knocking off the top and plunging his head in, a move that the Italians greeted with uproarious laughter.

Soon we were back in four-wheeled transportation, with our driver whipping across the highway toward the ruined city of Pompeii. Maybe it’s a phase that all little boys go through — volcanoes, like dinosaurs, are pretty cool — but as a kid, I was fascinated by thought of a city like Pompeii, destroyed and preserved by a volcano. The older one gets, the more important I think it is to hold onto the ideas you cherished as a child.

Pillars at one of the entrances to Pompeii.

Pompeii was founded sometime around the 7th century B.C., but of course, it is famous for being destroyed in A.D. 79 by the fires of Vesuvius. Tephra rained down onto the surrounding mountainside towns for six hours, covering Pompeii to an astonishing depth of 80 feet. The famous author and naturalist Pliny the Elder died while attempting to rescue stranded victims, but his nephew, Pliny the Younger, later provided a first-hand account of the eruption. 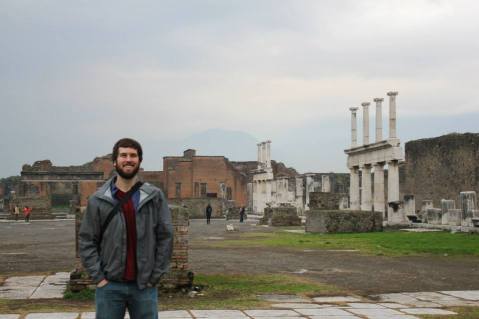 Standing in what had been the city center.

Pompeii provides both a fascinating window into the everyday lives of Roman citizens and a darker perspective on their fiery end. During early excavations in the mid-19th century, occasional voids in the ash were found that contained human remains. Plaster was injected to “recreate” the last forms of those who perished in the eruption.

Sunset over the ruined city.

One other thing I’ll share, and this is a bit odd. Our audio-guide made a point of noting the unique construction of the crosswalks in the city. Large, flat rocks were laid across streets with spaces of perhaps two feet in between them. This design allowed the wheels of wagons and chariots to pass through, but allowed pedestrians to avoid walking in the street itself. Why? The street was likely running thick with raw sewage.

Just think about why those stones are there.

With that visual fresh in your mind, next we’ll head to Florence, center of the Renaissance and one of my favorite cities.