Ancient Rome: The Colosseum and the Forum

Panorama of the Colosseum.

The Ancient Romans and their Greek forebears laid the foundation for the Western World to such an extent that I feel a bit silly blogging about ideas and images as immutable as the Colosseum and the Roman Forum. What can I say that hasn’t already been said by greater men than me?

Our second day in Rome was dedicated to the glory days of the Republic and the Empire. From the main Termini station right by our hostel, we took the Rome Metro two stops to the Colosseum station. Emerging from an underground train still reverberating with the rich sounds of a street musician’s saxophone, we spilled out into the crisp city air with the huge amphitheater standing just across the street.

Despite a slight chill and clouds (which later lifted to herald a bluebird day), visiting the Colosseum in December is an excellent time: While there were still quite a few people there, it was empty compared to the deluge of tourists during my last visit in summer 2005.

Amanda and I in front of the Colosseum.

Most people know that the Colosseum played host to gladiatorial battles and elaborate hunts, with false sets and scenery that could, along with exotic beasts and gladiators, be raised up from a subterranean network of tunnels to the arena floor. According to some historians, in the early days, emperors even held mock naval battles in which the arena was flooded and filled with ships and sailors. And despite an apparently common misconception, there is no historical evidence that the Colosseum was used as a place of execution for Christians. 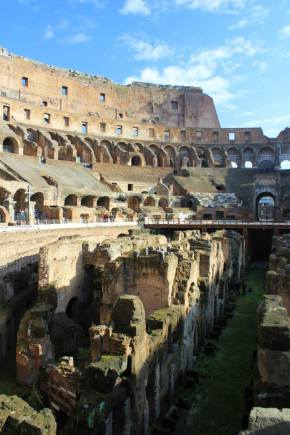 A good view of the hypogeum, through which scenery, gladiators, animals, etc. could all be raised up to the Colosseum floor.

The engineer in me was fascinated by the construction of the Colosseum, with its three levels, its many archways, and the different types of materials used on each level, depending upon the weight and strength. Structural engineering was never my strong suite, but all of the amazing buildings Amanda and I have seen in Europe make me wish I understood it better. 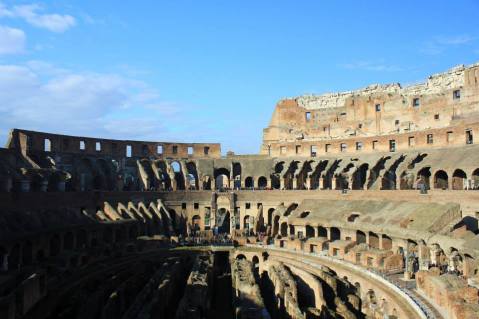 The interior of the Colosseum.

After the Colosseum, we headed over to Palatino Hill and the old Roman Forum. This was especially exciting for me because I didn’t get to go my last time in Rome. The Forum, originally a marketplace, is located in a small valley between two of the hills of Rome and was the center of ancient Roman public life, home to processions, speeches, elections, executions, trials, etc.

A view out across the ruins of the Roman Forum.

In the Roman Forum. 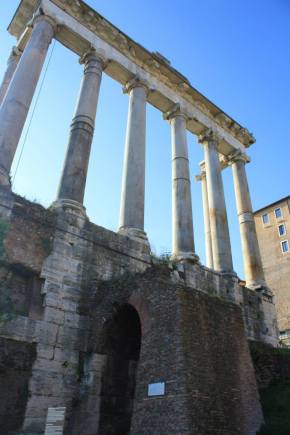 The remains of the Temple of Saturn.

Palatino Hill, the centermost of Rome’s fabled hills, towers above the Forum. According to myth, this is the hill where Romulus and Remus were found by the she-wolf who raised them. Romulus and Remus disagreed on where to found the city of Rome, and some versions of the story have Romulus killing his brother Remus. Either way, ancient historians agreed that Romulus founded Rome on Palatino Hill and gave his name to the city; modern historians find this creation story a bit more problematic. (One thing both ancient and modern historians agree on? Being raised by a she-wolf is pretty bad ass.)

Today, Palatino Hill contains some of the most ancient segments of Rome, including churches, the Imperial Palace, and ancient aristocratic houses. There were ongoing excavations when we were there.

The Farnese Gardens, the oldest private botanical gardens in Europe, stretch out across the northern reaches of the hill. As the warm Mediterranean sun shone down upon us, I spied a row of orange trees. After Oxford’s dreary climate, envy consumed me at the thought of living somewhere with sunlight beaming down out of a bright blue sky onto orange trees, all in the middle of December.

The gardens atop Palatino Hill

Oranges. Eat your heart out, England!

Starving after a day full of Ancient Rome, we headed to a nice Italian trattoria located a few blocks up a busy, very un-touristy street. Apparently, it was just far enough off the main drag because were the only English-speakers there, apart from our very obliging waiter. I had mouthwatering ravioli in a black truffle sauce, while Amanda had spiral noodles with a zucchini and Gorgonzola sauce.

I hate people who post too many food pictures, but this was really good.

After our late lunch, we grabbed some gelato and watched the sun set over the Roman Forum.

Sunset over the Roman Forum.