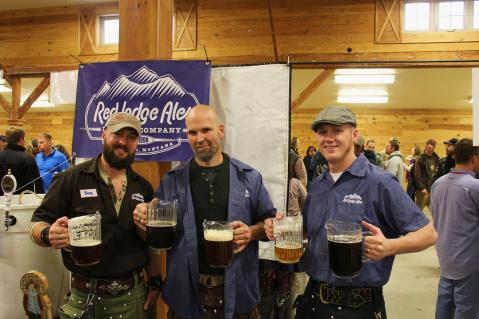 Members of the Red Lodge Brewing Company, dressed in kilts for the occasion, show off their wares. Photo by Brent Zundel

Nothing brings together a community like good beer and a good cause. With 38 breweries serving 110 beers and $1,000 donated to charity, last Friday’s Montana Beer Fest had plenty of both ingredients.

Event organizer Todd Clemens explained that the $1,000 will be donated based on the winner of the People’s Choice Competition. Each entrant was given one wooden coin that was used to vote for his or her favorite beer. The first, second and third place brewers will now select three Montana charities to receive $500, $300 and $200, respectively.

Clemens said, “A beer festival without a purpose is just an overrated night at the bar,” explaining that he wants the festival to continue growing every year so that Montanans can sample more craft beers and give even more back to the local community.

Various musical acts performed at the event, and “Beer Country,” a documentary that MSU students and their faculty advisor produced about Montana’s brewing culture, premiered in the TV lounge. A special lounge for designated drivers also provided free soda and water to those who performed a breathalyzer test to get in.

The Beer Fest — along with the Montana Brewers Festival, held in the fall — focuses on high quality brews made in Montana. Festivals like these provide Montanans the opportunity to sample not just beer from more established breweries, but also from smaller outfits. Entrants were given a 5-ounce glass and unlimited pours.

The real reason crowds turned out in droves for the event was, of course, the craft beer. Most of the familiar Montana breweries showed up, from Missoula’s Big Sky Brewing to the Bozeman Brewing Co., but harder-to-find beers from breweries like Helena’s Lewis and Clark Brewing Company and Stevensville’s brand-new Wildwood Brewing were also on tap.

Wildwood Brewing, the newest brewery in the state, opened in Stevensville, a half hour south of Missoula, on March 23. In addition to certifying their entire brewery as organic, they’re currently working on a methane digester and a mushroom farm to reuse their waste products sustainably.

The following are some of the most interesting beers I tasted. My criteria for earning mention here weren’t statistically valid at all; essentially, the beer had to be either exceptionally well-brewed or just plain interesting. I gravitated toward seasonals and brews that aren’t easily available in stores.

Blacksmith Brewing Company, Stevensville, Mont.: Coconut Oatmeal Stout. I hate to use a clichéd word, but this was the most innovative beer I sampled. A deep, rich, dark stout with a hint of coconut flavor and a nice coconut finish. A mind-blowing combination.

This festival brought together all sorts of local talent to support one of the most important and rapidly growing industries in Montana: craft brewing. There’s no adventure (or flavor) in drinking Bud Light, but Montana beers have flavors as big as our sky. By drinking local beer, we not only support good jobs, but we partake in an ancient ritual of mankind and sample a product that is brewed differently just one valley over.

If you disagree with Brent’s appraisal of a certain beer, he’d love to discuss it with you over a pint. Email the Exponent at editor@exponent.montana.edu to let him know.