By Brent Zundel
For the MSU Exponent
September 6, 2012

Unsettled rain clouds swirled around the Gallatin Valley and the Absarokas south of Livingston belched smoke into the surrounding air as Chris, Brian and I fled Bozeman last Friday evening. My roommate Chris and I had reunited with Brian, fresh off a summer guiding glaciers in Alaska, to try to conquer Montana’s highest point, Granite Peak, at 12,799 feet.

After Denali in Alaska, Granite is considered by many alpinists to be the hardest of the 50 state highpoints, due to its remote backcountry location, its technical routes and its temperamental weather.

We arrived at the trailhead around 9 p.m. and hiked through the bright moonlit cliffs surrounding West Rosebud Creek and the night-black pines lining the path all the way to Mystic Lake.

The next morning, we slogged up three miles of switchbacks, gaining nearly 3,000 feet until we reached the aptly named Froze-to-Death Plateau. Thanks to a consistent refusal from my legs to move faster than the speed of smell, I ensured that neither of my companions dropped a thing all three miles up the switchbacks.

On top of the switchbacks, Brian timed a short break and we started up a well-worn path toward the heart of the plateau. I grumbled something mostly unintelligible about slave drivers. Having already fastened his pack, Brian donned a wide grin and began walking off into the distance while singing, “Where there’s a whip, [crack] there’s a way!”

We slogged uphill across countryside that slowly evolved from high alpine tundra to larger and larger boulder fields, both dotted with perennial snowfields. At one of the first snowfields, another climber hustled up the hill to talk to us. One of the aspects of alpinism that most impressed me on this trip was the friendliness of every climber we encountered. Rather than resenting the presence of too many hikers in the wilderness, everyone went out of their way to discuss summit plans and weather conditions, out of both safety and genuine interest. 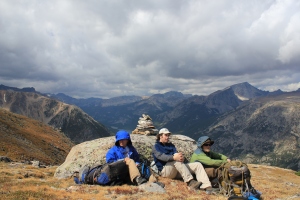 After a brief, unplanned detour to the edge of the plateau, we arrived at a campsite at roughly 11,500 feet and pitched our two tents behind a small alpine shelter consisting of a semicircle rock wall. Granite’s summit loomed black in the distance.

With a dinner of cheesy pasta filling our bellies and the outside air temperature rapidly falling, we gathered in one tent to plan our morning route as dark clouds rolled down the 12,486-foot Tempest Mountain south of our base camp. Within minutes, precipitation began pelting the tent as violent winds ripped at the shelter’s rock wall.

After 10 minutes of this pounding, we chanced a look outside and saw two inches of snow already accumulated around our tents. The storm let up briefly enough for us to wish for a flask of whiskey to drown our sorrows and conclude that we probably didn’t have the gear (or, in Chris and my case, the experience) to tackle a snow- and ice-covered Granite. Cracks of thunder, flashes of lightning, and snowfall persisted for much of the night. 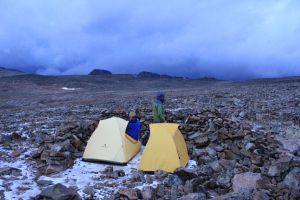 A photo of our campsite, during a brief respite from the night’s storms.

We woke early the next morning and, deciding that there was simply too much snow, dozed until the sun rose around 7 and then prepared to summit Tempest. Although it’s a non-technical hike, Tempest is only 300 feet or so shorter than Granite.

As we slogged past a false peak and up the snow-crusted boulder fields around Tempest, I felt every one of our 12,000 feet of elevation, finding it impossible to catch my breath. We paused at the summit long enough for a group photo, but it was the close-up views of Granite that stole our breath, far more than the altitude. Bright white snow dusted the entire mountain’s black granite cliffs, and thick black clouds swirled and churned, obscuring our view of the summit. 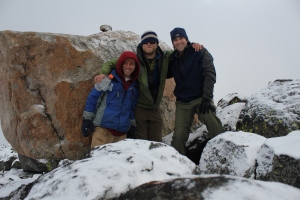 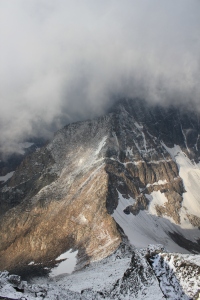 The best view we got of a cloud-shrouded Granite Peak, the highest point in Montana.

Following a boulder-hopping Chris’s cries of “I’m an idiot — follow me!” we descended back to base camp, where we packed up and hiked out, with the roaring winds of the plateau now at our backs. 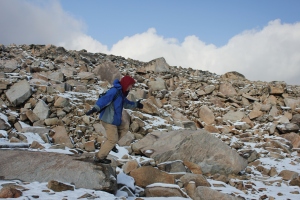 “I’m an idiot — follow me!” Photo by Brent Zundel

Later, as we devoured our burgers and downed a pint or two of Red Lodge’s finest brews at Roscoe’s Grizzly Bar, Brian repeated what had morphed into this trip’s mantra: “The mountain will always be there.” It will, and some day — blue skies willing — we’ll be back.